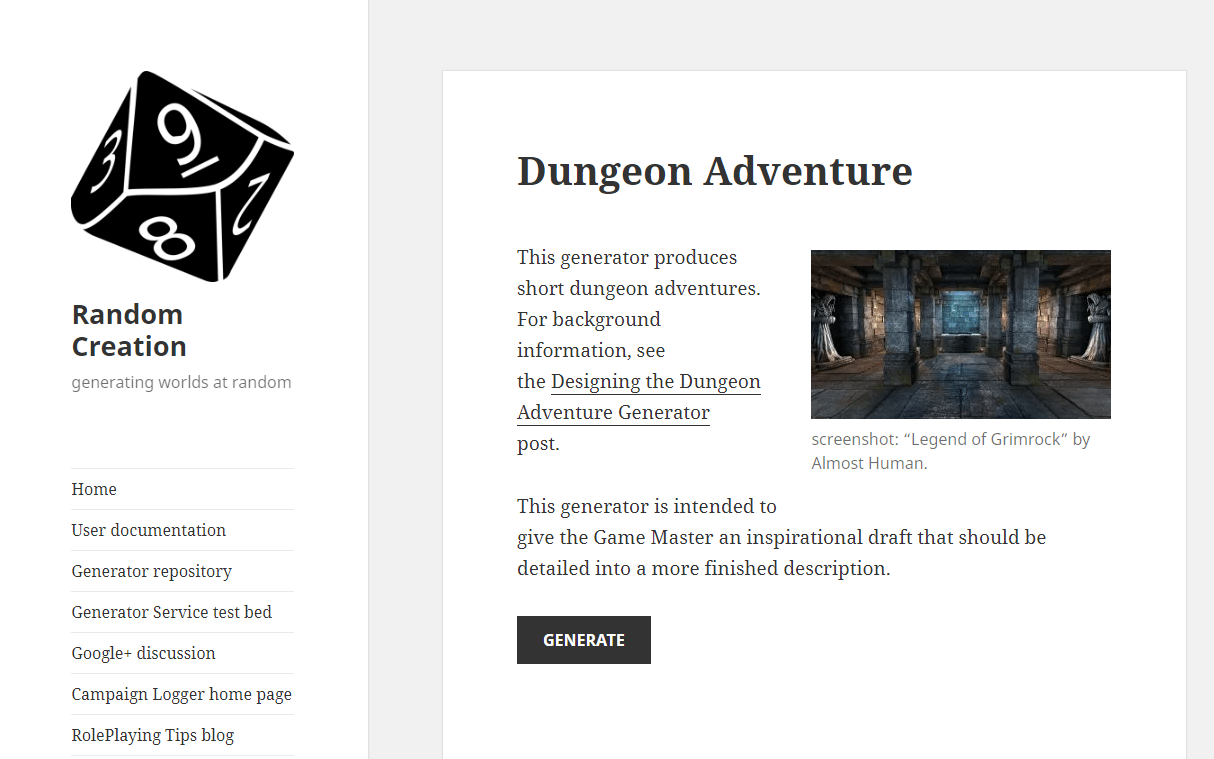 A generator that produces short dungeon adventures intended to give Game Masters an inspirational draft that should be detailed into a more finished description.


Unlike the D&D Random Dungeon Generators with Monsters and Traps this is a simple Dungeon Generator which provides a textual tapestry to help guide a Dungeon Master / Narrator without any kind of map.

There are no settings, just a simple Generate button.

1) A Title for the Dungeon Adventure.

Example: Quest for the figurine

Full Example Dungeon Adventure as Generated by this Program:

Quest for the figurine

Motif: Abode of a lost race. Last remains of a long-dead civilization have entrenched themselves deep underground.

Villain: An evil general with a slave gang.

Goal: The adventurer party must capture the ogre.

Macguffin: The adventure starts when the party finds out about a cursed libram that is chased by an unknown faction.

Treasure: Some fabled fabled figurine with a piece missing is said to be hidden in the dungeon – but little do they know that it is (incomplete)…

Dungeon complication: The otherworldly energies of the area are warped, creating unpredictable side effects each time magic is used.

A far superior force of slaves spots the troupe and starts a chase. In the end of long, rocky pier seems to be something strange: a spiraling staircase descending into a round hole in the ground.

Entrance complication: A vicious beast has built its lair in the entrance.

Problem with a hidden door [behind a large painting] [ajar]. This is a dismal, huge, square spot with brick walls and dirt floor. The hall looks like a temple.

Exits: There is one visible exit: steel double doors with a peephole and appearing to be sturdy [closed but unlocked].

A witch presents a challenge to the party. The enclosure is a small, squarish space. The hall is a bed chamber. A large bed lies next to the wall.

Exits: There are two visible exits.

1) granite double doors with an inset door with a ring handle and appearing to be built to last [wide open],

Flavoring: Here is a delicate rock formation that almost looks like it was designed by a supernatural intelligence.

Problem with a closed with ropes (requiring untying an extremely complicated knot).
This is a foreboding, medium-sized, squarish hall. The room has served as a treasury.

Exits: There are two visible exits.

1) double doors [trapped: (a vat of acid balanced on top of the door)],

2) door with an inset door [locked with a padlock (requiring a small, nondescript key)].

A great battle against the general and the minions ensues. The result will determine the final fate of everyone involved!

The adventure culminates in an action scene in a cabalistic treasure room.

A shocking turn takes the adventurer party by surprise. What will they do? That is a different story…

The area is a medium-sized, square enclosure with plastered masonry walls and rough stone floor.

The chamber is a feast hall.

A long table fills the center of the room.

Exits: There are three visible exits.

1) door with an inset door [barred from this side with a wooden latch],

2) iron-reinforced wooden double doors with an inset door with a ring handle and appearing to be strong [false door],

3) rectangular iron-reinforced wooden door with a lever as a handle and appearing to be strong [locked with a padlock (requiring a untended rusty iron key)].

[The duration of the pursuit is estimated to be roughly 150 minutes.]