Under Illefarn Updated for Pathfinder and D&D 3.0/3.5 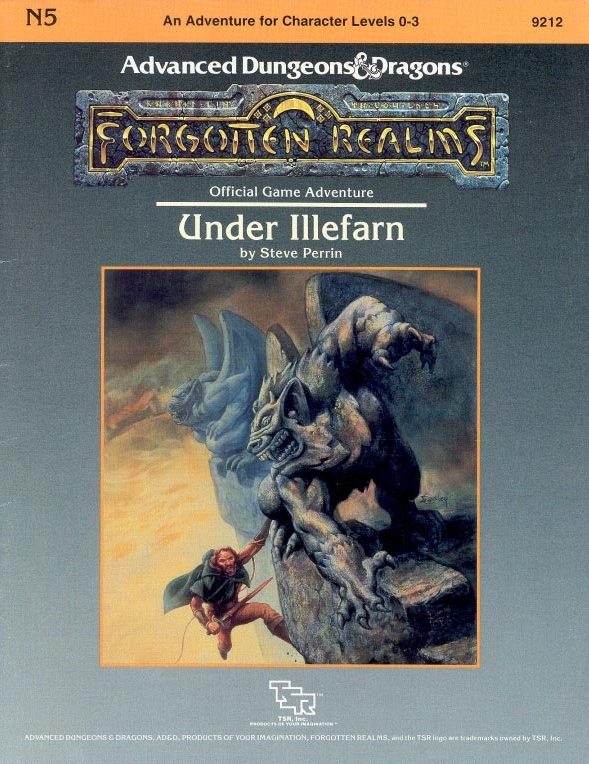 Under Illefarn Updated for Pathfinder and D&D 3.0/3.5

Under Illefarn is a module written for Advanced Dungeon s & Dragons under TSR and released in 1987. The original adventure module took place in the Forgotten Realms year 1347 Dale Reckoning (DR).

I have updated this module to work with Dungeons & Dragons 3.0/3.5 and Pathfinder hopefully to keep this great resource from being lost to time.

STILL IN PROGRESS: Not everything from this resource has been added.

I also found a supplement you can buy that updates this module for use with D&D 5th Edition: http://www.dmsguild.com/product/182560/Classic-Modules-Today-N5-Under-Illefarn-5e

Several of the NPCs would have died between 1347DR and present day, which I’ve noted throughout the material.

Most of the adventure module takes place around the Forgotten Realms down of Daggerford and is focused on 1st – 3rd level characters.

Under Illefarn Map 1: The Fallen Kingdom 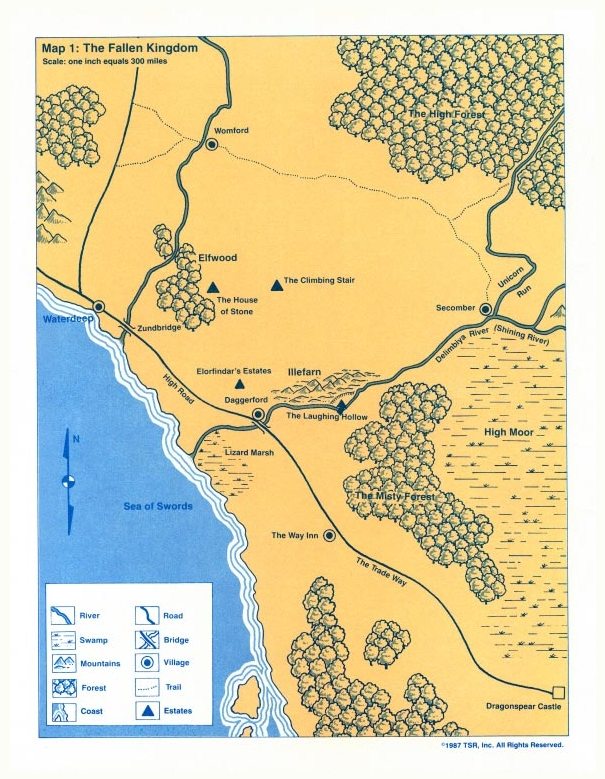 The following three adventures may be run in any order you choose. If you can’t decide where to begin, try starting with Lizard Raid. It doesn’t require too much decision-making, and novices will appreciate the numerous opportunities for action.

Regardless of which adventure you use as a starting point, be sure you run all three of them before attempting the final adventure. Not only do the first three adventures provide background information that will be helpful in tackling Under Illefarn, they will give the PCs enough experience to bring up their character levels. If the PCs are having a rough time, you might want to modify Lizard Raid or Caravan Duty and try them again. When the party consists of 3rd level characters (2nd level for the split classes), they’re ready for Under Illefarn.

You are on militia duty, guarding the wall on a beautiful morning in Daggerford. The serenity of the day is interrupted by a rider rapidly approaching from the west. As he nears the wall, he falls off his horse, extending an arm in your direction as if pleading for help.

The commander wastes no time in sizing up the situation. Baron Cromm is a friend of Daggerford. The Daggerford militia is the nearest help. The commander orders the PCs to investigate the baron’s holding and find out what happened to the baron.

Cromm’s holding is about 15 miles away (see Map 2), about two hours of steady riding. The commander provides the PCs with fresh horses and sends them on their way.

As you ride over a hill, you see a pillar of smoke rising from the tower of Cromm’s holding. As you watch, a stone wall falls in, the wooden supports eaten away by fire. A few reptilian bodies lie in the dirt. They appear to have been slain as they ran away.

The holding was raided by lizard men who somehow made their way over the wall and killed most of the 20-odd people in the hold. A few of the lizard men were killed as they tried to escape. They still clutch some of their loot, mostly cheap household items.

As the PCs approach the holding, point out to them that the dead lizard men are wearing ornamental belts and baldrics laced with blue feathers. When they enter the courtyard, read them the following:

In the courtyard, the heat from the fire is intense, but dying. Members of the household and some of the serfs, mostly women, are mourning their dead.

Suddenly, an ash-stained woman accompanied by a forlorn attendant rush towards you. The woman throws herself at one of your horses. You must help him. You must! she sobs. He’s gone after the rest of them, into the swamp!

The hysterical woman’s attendant fills them in. The woman is Piann, the baron’s wife. The baron and his men had been out hunting when they returned to find the lizard men completing their raid. The baron slaughtered the looters to a lizard and then, seeing that his only son was one of the victims, swore bloody vengeance against the marauders and left in hot pursuit in the direction of the Lizard Marsh.

If the PCs are reluctant to chase after the baron into the swamp, point out to them that the continued survival of humans in the area depends on marauders knowing their hostile actions will bring swift retribution. Also remind the PCs that their commander has ordered a complete investigation.

Since the baron was not trying to conceal his passage, the PCs have little trouble finding and following the trail. If any PC wonders why the lizard men took a land trail, have him make an Ability Check against his Intelligence. If he succeeds, tell him the lizard men wouldn’t want to risk losing their loot in the swamp.

Entering the marsh is like entering another world. It is thick with lush vegetation. Reeds grow as high as a man on horseback, making long distance viewing impossible. The flat terrain is occasionally broken by a hillock which rises above the reeds.

The following table lists a few of the many dangers the PCs may encounter in the marsh. Statistics and details of each encounter follow.

When the PCs first enter the swamp, roll 1d6. A result of 1 indicates an encounter. Roll 1d6 again and check the table.

The baron and his men had a run-in with several of these dinosaurs and came out on the short end. However, he killed one and his men wounded another. The wounded ceratosaur is in a killing rage and attacks anything that looks like the people who hurt him.

This hungry pteranodon swoops out of a tree and attempts to spear one of the riders and carry him away. If it loses more than 5 hit points, it flies away to search for easier prey.

One of the horses wanders into some quicksand and begins to sink, taking the rider with it.

The horse will sink in 2d6 rounds unless the PCs do something, but saving it isn’t hard. Any two PCs with a Strength of 10 or higher can pull it out. (Rescuing a horse is worth 35 experience points.)

The toad leaps from a clump of bushes over the heads of the PCs on the trail, intending to land on the opposite side. In mid-leap, it attacks a PC. If the PC is killed in a single attack, the toad drags the body into the brush a and vanishes forever into the swamp. If the PC is not killed, the toad gives up and hops away.

This creature comes out of the mud right next to the party and tries to swallow a horse and rider, which it can do on a roll of 20. The lizard reacts to so slowly that it watches the entire party march by before attacking the last PC in line.

A giant black centipede drops out of a tree on the neck of a randomly chosen PC. The centipede’s bite does no damage, but a bitten PC who fails his saving throw vs. poison is unconscious for 1d4 hours.