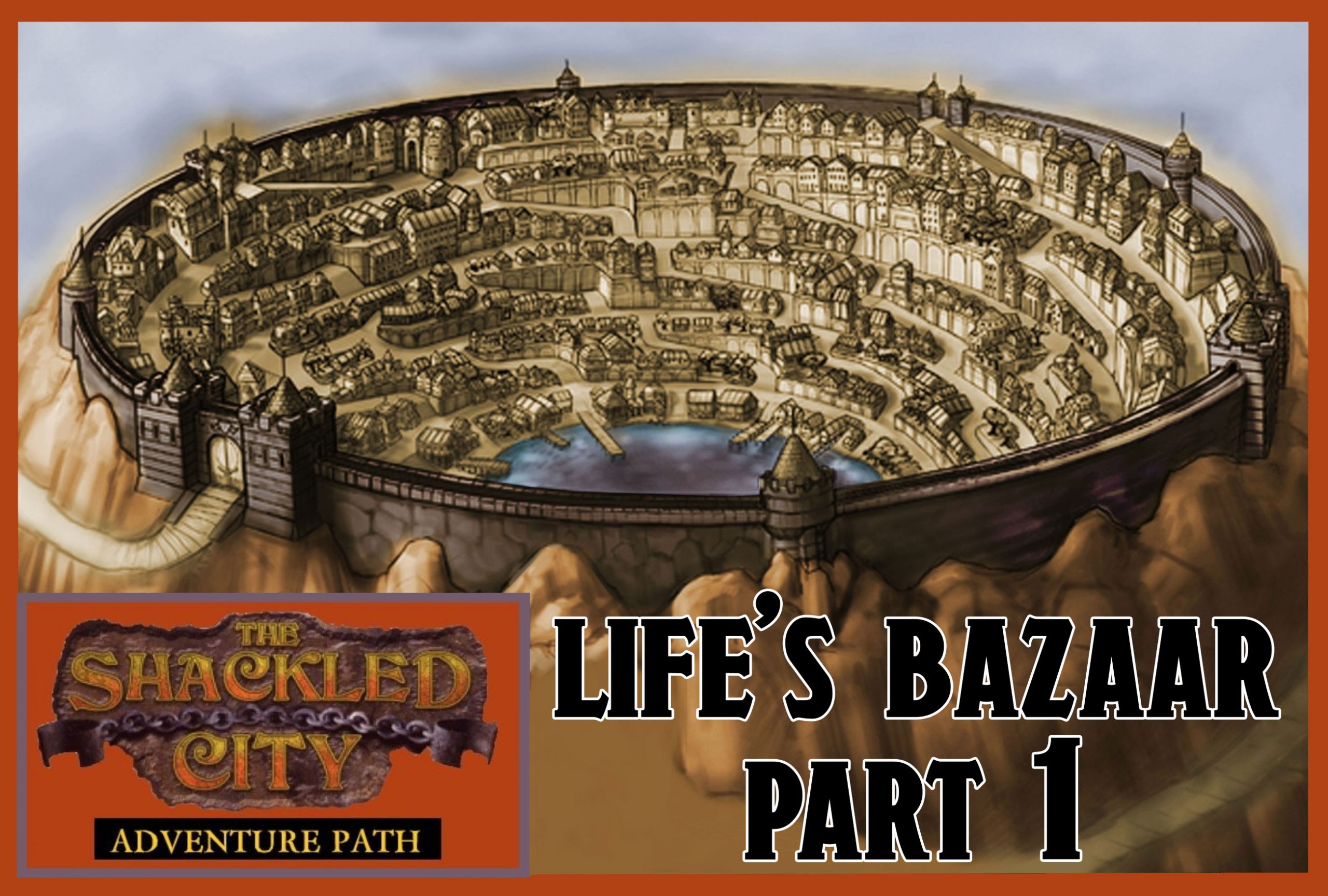 This Web Enhancement provides you with a number of extra NPCs, an additional Player Handout, a new trap, the statistics of the monsters from D&D Monster Manual II that appear in “Life’s Bazaar” Part 1 of The Shackled City Adventure Pat, and some extra campaign tidbits to use when running “Life’s Bazaar” from Dungeon Magazine Issue #97.

Before you read this, you should read the entire module: Life’s Bazaar, Part 1 of the Shackled City Adventure Path.

Cauldron has more than one small guild of thieves, but perhaps the most influential guild is called The Last Laugh. The guild’s symbol is the silhouette of a laughing jester, shown in profile. The guild oversees various rackets and specializes in security, blackmail, extortion, and assassination.

The guild’s leaders, called Jesters, form an inner circle that oversees all guild activities. Speculation abounds that at least one of the guild’s Jesters is a high-ranking town official or noble.

Three months ago, the inner circle learned of the arrival of an evil society called the Cagewrights. Rather than oppose the Cagewrights, the Jesters formed a pact with them. The Last Laugh provides security, masks the Cagewrights’ activities, diverts the attention of the local authorities and rival guilds, and eliminates meddlesome spies and adventurers who threaten to derail the Cagewrights’ plans for Cauldron. In exchange, the Cagewrights have promised the Last Laugh control of the town’s “underworld” once it has been transformed into a Carcerian gate-town

The Jesters, few in number, rely on an intricate network of spies, agents, and informants. Their immediate subordinates are called harlequins—skilled rogues and assassins who paint their faces and handle much of the guild’s “dirty work.” The guild also uses spies—called mimes—to infiltrate rival organizations, verify rumors, and gather information on troublesome bands of adventurers.

The Last Laugh mints its own currency by melting down sovereign coins and recasting them with the guild’s jester insignia. The coins have infiltrated the local economy, and most people consider them no worse than the sovereign’s gold or silver. Some see the “jester coins” as a joke, while others view them as a threat to the economic stability of the town. Although the Lord Mayor has vowed to catch the criminals responsible, the local authorities have had no success tracking down the source of the coins, leading some to suspect corruption in the local militia or the Lord Mayor’s office. 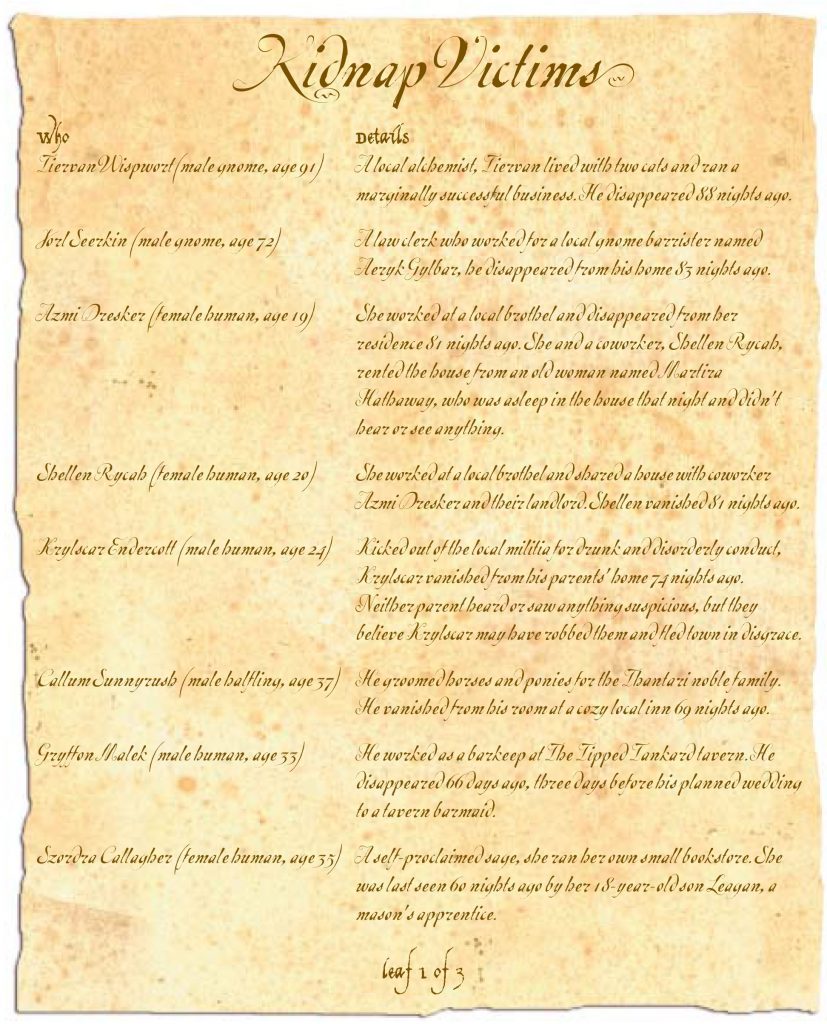 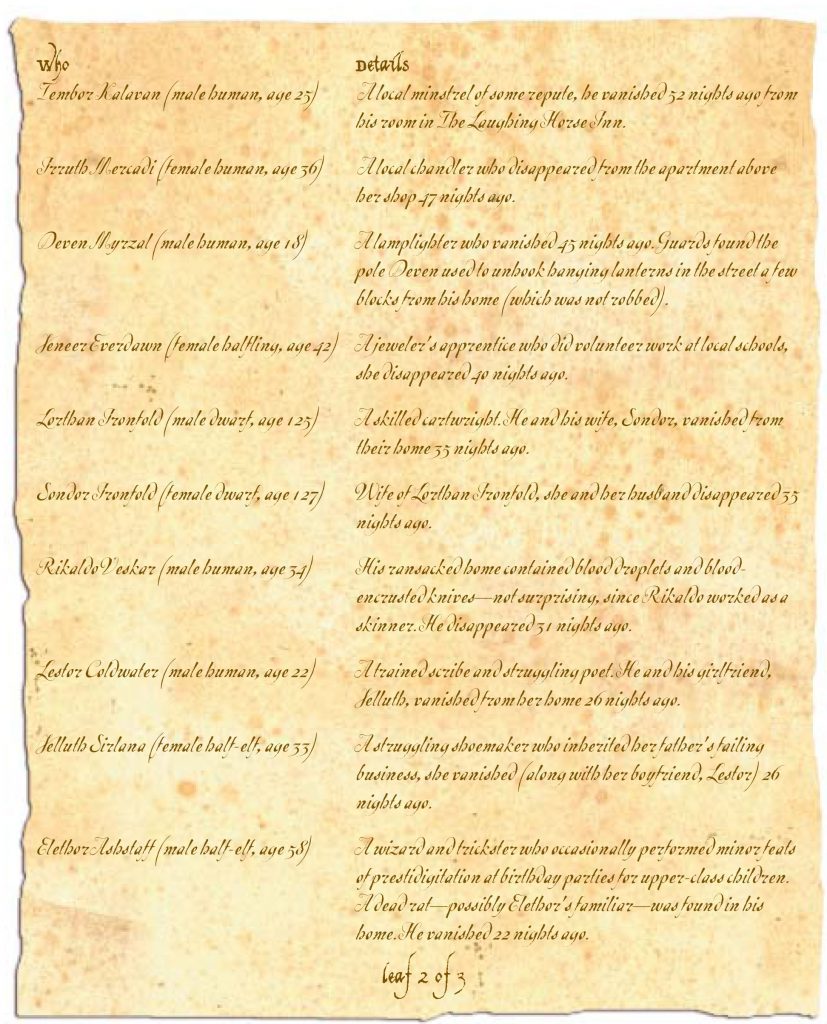 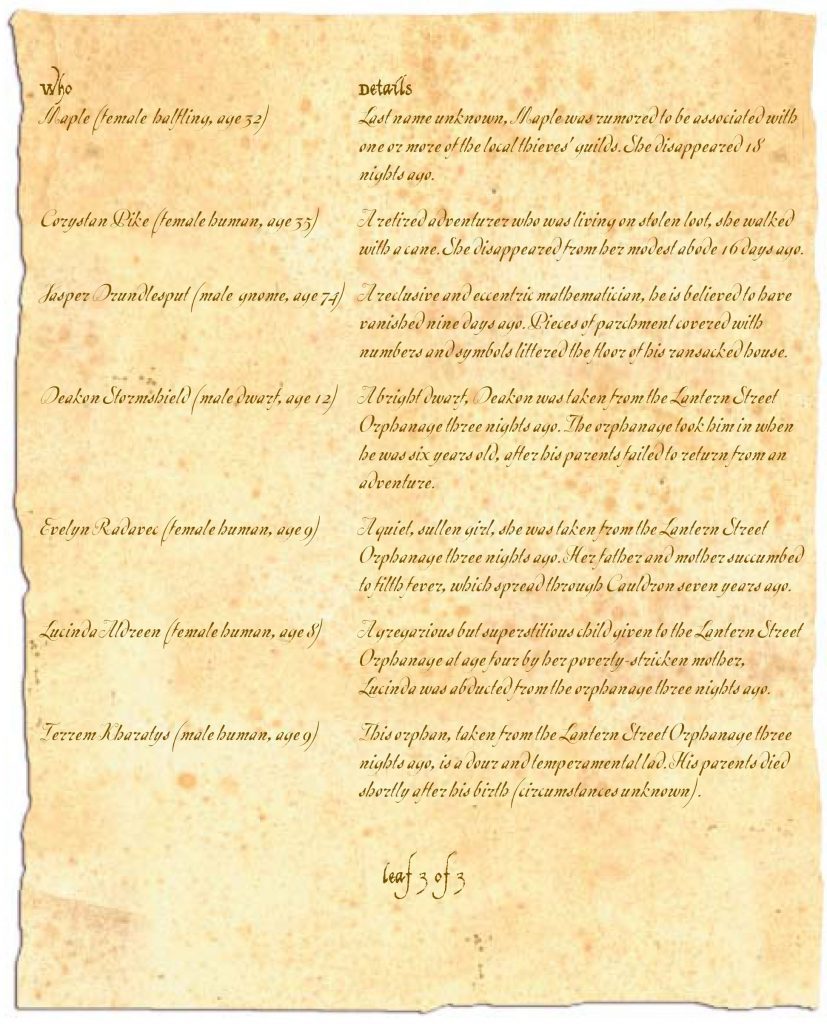 Substitute this wicked trap for any or all of the three pit traps in areas J6, J12, or J14. Swap the text below (this text was written for area J6 specifically, but it also applies to the other two areas) for the Trap text provided in these areas. See below for information on deactivating the traps.

Trap: The 10-foot-square section of floor conceals a 20- foot-deep pit (Search check, DC 17, to detect). The pit’s hinged lid opens when at least 150 pounds of weight is applied, although a successful Disable Device check (DC 17) jams the lid shut. Pulling down the lever in area J34 locks the lid and deactivates the trap.

Anyone standing on the lid when it opens must succeed at a Reflex save (DC 15) or fall into the pit, taking 2d6 points of damage and landing prone. Once the trap has sprung, have the characters roll initiative. The pit has Dexterity 15 for purposes of determining its initiative.

On the second round, the pit tilts back to its original upright position. Anyone in the tilting half of the pit drops to the wooden floor of the pit and is knocked prone, but suffers no damage.

On the third round, the pit tilts 90 degrees to the north, throwing anyone within onto the other wall of spikes.

On the fourth round, the pit tilts back to its original upright position. Anyone trapped inside the tilting half falls to the bare wooden floor and is knocked prone, but suffers no damage. The pit stops tilting at this point until the trap is sprung again. If the pit’s lid is held or wedged closed, the tilting continues. The lid can be pushed open with a successful Strength check (DC 10) and wedged open with a successful Disable Device or Intelligence check (DC 17).

The gear mechanisms that cause the wooden half of the pit to tilt back and forth lie 30 feet below the lip of the pit. When the pit is tilted to the north or south, these gears are clearly visible from the top of the pit. Dropping a dagger, rope, rock, or similar item into the gears requires a successful ranged attack (against AC 15) and has a 20% chance of jamming the tilting mechanisms. Conversely, a rogue lowered down to the gear mechanisms can jam them with a successful Disable Device check (DC 17). Once the gears are jammed, the pit stops tilting.

Trapped characters can smash through the wooden walls or floor of the pit to escape. They can also attempt to clamber out of the tilt-a-pit while it is upright. Getting out of the tilting half of the pit requires a Climb check (DC 10 if one uses a rope or the wooden spikes as handholds and footholds). If a knotted rope is used, the DC drops to 5.

Anyone in the unlikely position of being crushed by the tilt-a-pit takes 4d6 points of damage, or half damage if a Reflex save (DC 15) succeeds.

Area J11: Pulling down on the lever deactivates the trap in area J12.

Area J12: This trap is identical to the one in area J6, except the pit tilts to the east and west (instead of north and south).

Area J13: Pulling down on the lever deactivates the trap in area J14.

Area J14: The trap is identical to the one in area J6, except the pit tilts to the east and west (instead of north and south).

Area J34: Pulling down on the lever deactivates the trap in area J6.

With the help of Lord Vhalantru, the Cagewrights’ dark agenda has gone unnoticed by most of the townsfolk. However, their appearance in Cauldron has caught the eye of the Striders of Fharlanghn—a loosely run organization of adventurers who watch the horizons for signs of great evil and strive to preserve the balance of power in the realm. The Striders have tracked several Cagewrights to Cauldron and seek to uncover their plans.

hip powerful extraplanar fiends living in Carceri. Years ago, with the help of some good-aligned adventurers, the Striders attacked a cabal of Cagewrights in the realm’s capital city, but not before the Cagewrights called forth one of their vile masters from the prison plane. Several Striders perished in the battle, but the fiend was eventually banished back to Carceri, and the surviving Cagewrights were routed.

The Striders of Fharlanghn have sent one of their own, a neutral good half-elf named Meerthan Eliothlorn (Wiz12), to undercover the Cagewrights’ machinations in Cauldron. Meerthan, posing as a dwarven merchant named Tyro Amberhelm, has a room at The Drowning Morkoth Inn. He suspects that the Cagewrights are behind the recent string of kidnappings. When the Church of St. Cuthbert hires the heroes to investigate the matter, Meerthan takes interest in their activities and sends invisible agents to follow them as they make their way underground. If the heroes get in a bind, these agents might come to their rescue at some opportune moment.

A dwarven defender named Zenith Splintershield once commanded the Malachite Fortress’s dwarven garrison. Ten years ago, this paragon among dwarvenkind left the fortress to wage war against the monsters of the Underdark and never returned. Although his campaign undoubtedly failed, he may still dwell in some deep dungeon, a half-crazed zealot bent on purging evil from the subterranean realm or an imprisoned foe of the mind flayers, derro, or another Underdark menace.

“Life’s Bazaar” uses several monsters from Monster Manual II. To conserve space, their complete statistics were omitted from the adventure text, but that information has been provided as a service here to accommodate our readers who do not own Monster Manual II. We highly encourage those readers who have not yet picked up a copy of this supplement to do so, as the information provided here is skeletal, at best—intended only to provide you with the minimal information necessary to run the adventure.

Sonic Shriek (Ex): Once per round as a standard action, a pulverizer can loose a cone of sonic energy 30 feet long. Everything within the cone takes 1d8 points of sonic damage. In addition, every creature within the cone that fails a Fortitude save (DC 13) is stunned for 1 round. (This value incorporates a +5 racial bonus to the save DC.)

Unreliable (Ex): At the beginning of each round in which the automaton attempts to act, roll 1d20. On a result of 11 or better, the pulverizer acts normally; otherwise, it takes no action.

Unreliable (Ex): At the beginning of each round in which the automaton attempts to act, roll 1d20. On a result of 11 or better, the hammerer acts normally; otherwise, it takes no action (although its pincer can maintain its hold on grappled prey).

Int 10, Wis 15, Cha 17. Improved Grab (Ex): If a raggamoffyn hits a Small or Medium-size opponent with its slam attack, it deals normal damage and attempts to start a grapple as a free action without provoking an attack of opportunity. If it gets a hold, it can attempt to wrap (see below) in the next round. Alternatively, it has the option to conduct the grapple normally, dealing slam damage with each successful grapple check it makes during successive rounds.

Control Host (Su): A raggamoffyn can attempt to take control of a creature it has wrapped (as the dominate monster spell). Resisting the raggamoffyn’s control requires a successful Will save (DC 14). The monster can relinquish its control over the host by physically and mentally disengaging itself from the latter’s body.

Suffocate (Ex): The raggamoffyn can asphyxiate a wrapped creature by drawing air from its lungs. This attack automatically deals 1d4 points of damage per round.

Improved Grab (Ex): If the grell hits a Medium-size or smaller opponent with a tentacle attack, it deals normal tentacle damage and attempts to start a grapple as a free action without provoking an attack of opportunity. Each successful grapple check during successive rounds automatically deals tentacle damage

Paralysis (Ex): Any creature hit by a grell’s tentacle must succeed at a Fortitude save (DC 14) or be paralyzed for 4 rounds.

Tentacle Regeneration (Ex): Foes can attack the grell’s tentacles, but only when those appendages are actually holding an opponent. A tentacle has AC 19 (touch 12) and 10 hit points. A lost tentacle grows back in 1 day

Beard (Ex):If Pyllrak hits a single opponent with both claw attacks, he automatically hits with his beard attack as well.

Coryston Pike’s adventuring career may have been cut short, but if she survives her experience in the Malachite Fortress, the PCs will have gained a useful ally. Her father, Dovin Pike, leads a powerful merchant cartel in the realm’s capital city, and she has access to contacts and resources not usually available to a character of her level. Her father has little respect for adventurers in general, but Coryston knows many ways to creep into his heart. She also enjoys manipulating her father’s sycophantic underlings to secure expensive items (including single-use or charged magic items) at a reduced price. Provided the heroes don’t need an item immediately, she can get it for them in 1d4+3 days at a discount (25% for potions and scrolls, 10% for everything else).

When she is not locked away in some subterranean prison, Coryston keeps abreast of events around her. PCs can tap her knowledge of local rumors, as well as her knowledge of people and places in Cauldron

If the characters explore Cauldron, you might need to generate names for innkeepers, town guards, nobles, and other NPCs. The following tables provide first and last names for Cauldronites of each of the Player’s Handbook races.