The Shackled City Adventure Path by Paizo in Dungeon Magazine 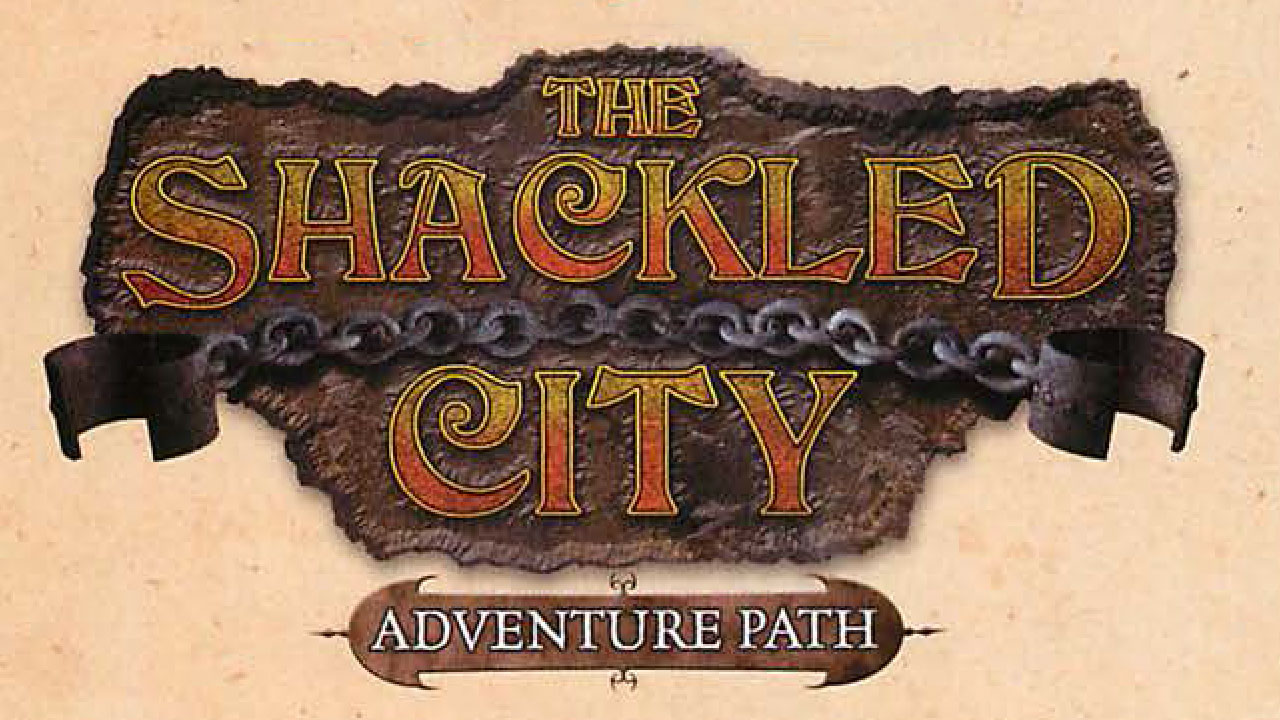 The Shackled City Adventure Path by Paizo in Dungeon Magazine

The Shackled City Adventure Path (or simply Shackled City) is a role-playing game Adventure Path designed for Dungeons & Dragons (D&D), originally published as a series of adventure modules in Dungeon magazine. Later they were collected and published in a hardcover edition with an additional chapter – Drakthar’s Way – written especially for the book release. Various elements of the game were revised for the collection; the setting was enlarged to better suit the needs of a typical high-level game. Playing through all the modules would take D20 Characters from 1st to 20th Level!

The player characters investigate recent kidnappings. The trail leads to a slaver operating from Underdark passages below the city.

Small bands of goblins raid and vandalize the city. The player characters track the goblins to a hideout in a series of caves below the city that lead out the side of the mountain. The goblins are led by a vampiric bugbear, the eponymous Drakthar.

In this adventure the city of Cauldron is threatened by flooding during the rainy season. Magical wands of “control water” normally used to control the flooding are stolen and taken to a lair below the city. The player characters presumably track down and recover the stolen wands.

The player characters are asked to rescue Zenith Splintershield, a dwarf who has been missing since heading into the Underdark to fight evil. Zenith has gone insane and is treated as prophet by the kuo-toa who captured him.

In this chapter, the heroes must find a missing paladin to stop an incursion by Cauldron to nearby Redgorge. After retracing his steps through a jungle, a giant-controlled cavern, and an otherworldly maze, they must face the demonic architect of the area’s strife.

Following their warning from a dying paladin to “seek the sign of the smoking eye”, a mysterious plane-wanderer asks for their help in completing a series of tests to redeem an abandoned layer of the Abyss.

After several assassins attempt to kill the heroes, they are traced back to the temple of Wee Jas. After assaulting the temple and fighting its undead inhabitants, they are led to an ancient frozen spell weaver complex, where a powerful oracle is guarded by a horrific undying dragon.

An ally of the heroes is kidnapped and taken to a safe house of the Last Laugh, Cauldron’s thieves guild. Once they break in and rescue him from the den of thieves, they learn of a secret meeting among some of the realm’s most horrific criminals at a noble’s mansion. In addition, their beholder overlord is practicing unholy rituals in the complex below.

The Cagewrights begin their plans in earnest now, awakening the volcano on which Cauldron is built. Spewing lava, earthquakes, and collapsing buildings require the heroes help to get everyone evacuated. Worse, demodands begin to emerge from a planar rift already building, and a certain local dragon gets riled up by it all.

The heroes must march on the Cagewrights’ headquarters, in the heart of a volcano, before their ritual is complete and a permanent gate to Carceri is opened above Cauldron.

What few Cagewrights remain must be hunted down and exterminated in their jungle retreat.

When the twisted mind of Adimarchus, imprisoned Demon Prince of Madness, leaks into Occipitus and begins resurrecting his followers, the heroes realize they must go to the otherworldly asylum of Skullrot where Adimarchus is imprisoned and destroy him utterly.